There was a time when Eurostar was an easy, smooth and somewhat luxurious way to hop across – or more accurately under – the Channel.  As a family who live scattered across the European continent, we would make the train journey feel part of the whole holiday adventure by travelling en-masse for family events, carting a huge picnic on-board or upgrading to the glass of bubbly, three-course meal and comfy seats of business class.  Now though, it is more akin to a 2-3 hour journey on any cross-country train and a little scruffy at that.  At peak times like Christmas, under the chipped gloss, it heaves under the seemingly unexpected (although since it happens every year on the same day you’d think by now they’d have got it sussed) strain of expat families racing to get together.  St Pancras teams with queuing hordes loaded high with luggage and presents travelling to Brussels, Paris and further afield.  All are funnelled through electronic gates and then bottlenecked at security and left waiting for space on the x-ray conveyor belt, while standing in between electric doors that keep closing on your luggage or on your upper arms.  Last time I went through, after surviving the automatic doors, I spent half an hour watching a security official grunt and waft orders at me to unzip bags and pouches, then unceremoniously dump the contents of my case onto the counter and walk away.  It gave me just enough time to re-pack, push through UK border control, then French border checks and get to the escalator for the platform in time to be told off for almost missing my train (clearly I should have arrived more than the recommended 2-hours before my train’s departure).

So when my husband and brother suggested we go across ‘retro-style’ at Christmas – on the ferry – I thought why not.  Needless to say we picked the best day for our crossing – gale force winds and blinding torrential rain.  But we were not to be cowed and set off whacky-racers style on our convoy down to Dover.  Nostalgic to be back at the white cliffs before being swallowed up into the belly of the Pride of York.  Nothing like the number of cars I remember in the lanes in those pre-Eurostar and Chunnel days though.

Retro travel queueing for the ferry

It may have been a little choppy and there were a few very green looking faces bouncing off the walls as we made our way up and down and across the Channel.  There were also a great many people enjoying hearty fish and chips, doing a spot of shopping and chatting over tea while staring out resolutely at the horizon, thereby batting off the onset of sea-sickness (yours truly).  Despite the weather, we were off and on the road to Brussels on time and even had plenty of time to stop off in Ghent on the way to Brussels for some Belgian chips, mulled wine and a browse around the Christmas market.  So full points for the good old-fashioned sea voyage across the Channel.

Or so I thought.   Just how old-fashioned only really came clear on the return journey when rough (understatement) seas prevented us from crossing for over two hours.  Not a problem said the apologetic note from the French port authorities as they would like to “draw our attention to the facilities offered in the Terminal building: toilets, a cafeteria and a bar”.This, we soon realised after arriving at said establishment after braving horizontal rain and gusts sweeping you off your feet, was actually a ‘slight’ overstatement.  We found no Terminal building.  Just a big sign pointing to a small (heated – small mercies) room with a toilet and three overused heaving vending machines.  Not quite what it said on the tin.  The contents of my thimble-sized plastic cup were most definitely not ‘rich tomato soup’.  The ‘creamy hot chocolate’ and ‘rich vegetable soup’ (naive waste of money or generous attempt to give the machine the benefit-of-the doubt?) were neither creamy, rich, or chocolate or vegetable.  Rather than apologise for the “adverse weather conditions causing delays”, they might have wanted to focus on their “cafeteria and bar”.  Just a suggestion. 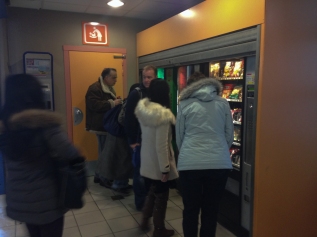 So the retro road-trip, Channel cruise choice falling short of a gold star.  But then if we were judging on authenticity of the retro journey, I suppose the French port authorities have indeed stayed with a traditional 1970s ‘coffee shop’ offering; rather apt for fer ry crossings that have been around for decades and survived the advances in technology and invasion of Costa offee shops everywhere else.  It just would have been nice if rather than dressing it up as ‘Le petit café du coin’, they’d told us it was indeed a coin’ and ‘petit’, but your chances of any ‘café’ were slim to grey and luke-warm.  They could in fact learn from Eurostar, which on an earlier trip, as we pulled out of Waterloo station (in the olden days before the move to St Pancras) we were greeted with the announcement that the buffet car had run out of tea, hot food and small cups.  Abysmal and in record time, yes.  But at least there was no attempt at cover-up or glamorising.  You will pay through the nose, probably be delayed on the French side due to strikes, and on the UK side due to leaves on the line, and throughout your journey you WILL enjoy a wide range of snacks; namely ready salted crisps and large cups of coffee.  Simple.

So if you’re looking for speed without frills and a city-to-city jaunt – I’d go Eurostar, but take a picnic and a good book in case there are leaves on the line or a fire in the tunnel (to be fair that’s only happened once I think).  If you’re looking for a road trip and are happy to take it easy and see some countryside – I’d go with the ferry, but take a picnic, sea-sickness tablets and check the weather forecast first.

Either way it’s all part of the experience of seeing family when like mine, it’s multinational and everyone’s scattered across Europe (I haven’t tried the trains across Germany but am told by my German relative that they are very punctual and clean – well, they would be wouldn’t they).  I just wonder what some of the visiting tourists think.  The Japanese manage to get drink dispensers to the top of some of the highest mountains, the Americans have food outlets every few hundred yards on every road, and the Australians couldn’t have horizontal rain and weather-delayed ferries if they tried.  What a culture shock it must be when they come and visit our Europe.  And on reflection how delicate of them to only call it ‘quaint’.

One thought on “Train or ferry? A lesson in European travel”

Fighting on two fronts - Lessons from communications in a war zone (invited by the City of London Guild of Public Relations Practitioners)March 5, 2014
Talk at the Ellwood Atfield Gallery, London