The world’s most incredible views: from the sky

As I marched through Southampton airport, I was focused on getting a large cup of tea before boarding a Sunday morning dawn flight to Spain.  I approached the queue at security feeling smug because all my toiletries were already in a regulation plastic bag, my laptop was out of my holdall and I had unzipped my boots ready to put them into the grey plastic tray and saunter through the electric gate like the veteran of flying that I was.  I initially didn’t notice the 50-something lady with the straw hat and immaculate make-up looking somewhat bewildered next to the smiley and sad face buttons of a ‘how have we done here today’ machine in departures that you’re supposed to press on your way through as an ‘on the go’ customer survey.  I stopped because she was the only person not rushing around furiously or carrying a sombrero.

While fingering an IKEA ziplocked bag with miniature shampoo and conditioner in it, she asked if her choice of container would pass muster with the bulldogs at security; “I’ve never flown before so this is all a bit new to me”, she said.  We compared plastic bags and I told her she would no doubt be fine, while gasping inwardly.  How, in 2018 had she never flown before.  Judging by her appearance (and it is dangerous to judge any book by its cover) and the makes of the toiletries in her bag, she was smart, probably educated and had spare cash.  So how was she one of the apparently only 22% of Britons who have never travelled in a plane (according to a survey by Kayak, a travel website)?  I asked if she was nervous or excited and she answered “a bit nervous but mostly excited; I’m going to visit a friend who’s moved to Spain”.

Later at the departures gate there was a bit of a commotion in the queue ahead of me when a passenger told the Flybe operator that they were not comfortable in an exit seat. Seats had been allocated randomly and the Flybe employee had asked the question on the assumption it was a no-brainer. Exit seats have much more leg room so tend to be at a premium.  But it was my friend on her maiden flight and she wasn’t “at all sure I could open the door if I needed to”.  I told her if it came to that we were all in trouble and that flying was the safest form of travel, but she was clearly not going to enjoy the flight with the burden of even the slightest of probabilities.  So I offered to swap seats.  I was her rather embarrassed hero as I settled into her original seat, the spacious and neighbour-free 1A on the propeller-driven Q400 Dash 8 aircraft, and she made her way back to the considerably more cramped seat 11A.

This was just a 2 and a half hour flight to Spain on a budget airline and even though I absolutely love flying, I was focused on just getting to destination and getting the job done.  On this occasion I had been completely taking the journey for granted.  So as we pulled out of our stand, I tried to put myself in this lady’s shoes, seeing all this for the first time:

I actually watched the safety demonstration closely.  If you really think about it, it is somewhat alarming – albeit necessary – that someone stands there calmly telling you how to inflate a lifevest, “topping it up here” and “with a light and whistle to attract attention here”.  I mean, where else do you go where the first thing you’re told is what to do in the worst-case scenario?  Hardly something to fill you with confidence on your first ever trip; no wonder she didn’t want to have to contend with opening the emergency door too. 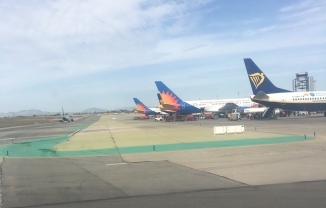 I got a pang of disappointment on her behalf that she was experiencing flying in the modern age of budget travel and had missed out on the glamorous old days of flying where you were offered a drink on take-off (usually served on a small square napkin with some peanuts and always with lemon and ice even if you’d only asked for water).  You were then served a meal (included in the price of your ticket) and it was served with metal cutlery and a warm smile (with the notable exception of one 26-hour Alitalia flight when I was about 10 years old where the air hostesses made absolutely sure we felt their pain too) by an immaculate air hostess.  To be fair, Sarah and her colleague – now called cabin attendants – were lovely and very professional.  Both even had the colourful scarves tied around their necks at a jaunty angle, harking back to British Airways adverts in the 1980s when the airline’s logo was “We’ll take more care of you” and they really did. Now you get the hospitality and warmth of that VIP treatment, but only if you’re paying the VIP prices.

Dawn above the clouds

The lady did get one priceless treat though; we took off as the pink dawn broke over clear skies and we flew low over the unmistakable wide Thames snaking through Greater London. Small marinas dotted around the tributaries and on the coast, the toy yachts carefully lined up in their berths. She couldn’t have picked a better day to see the world from the air.  We reached the top of the climb and you could almost touch the white fluffy cotton wool clouds as we passed them and settled at cruising altitude just above the duvet with a golden glow from the early sun.

Arrival in Alicante was equally spectacular.  With only the odd wisp of cloud, the temperature was “nudging 30 degrees” according to the Captain.  The rising tower blocks of the Costa Brava and the scattered bright blue squares of swimming pools nestled incongruously against the moonscape of the limestone peaks of the Alicante mountains.  The sea, dotted with pleasure boats and larger ships further out, stretched as far as the eye could see.

We touched down with barely a bump and trundled round to our stand.  It was textbook and probably the ideal flight on which to travel for the first time.  As I disembarked, my mind went back to business and I strode off to find the sign with my name on it in arrivals.  I hope the lady in 11A enjoyed her first flight and – holiday notwithstanding – cannot wait for the return journey.  She certainly helped to remind me of the magic of flying.  Even on the shortest flights and even in an age when commercial imperatives have binned much of the glamour and the fast pace of life has taken some of the sheen off, it remains one of the wonders of our age.  No amount of budget packaging or familiarity should take away from the fact you can eat breakfast on one continent, lunch in the air, and be ready for dinner on the other side of the world.  We can admire the most spectacular views in the world, all while somehow travelling at hundreds of miles per hour up at 30 thousand feet in a tin can.  I don’t know about the lady now relaxing in Alicante with her friend, but I’m already looking forward to my next take-off.