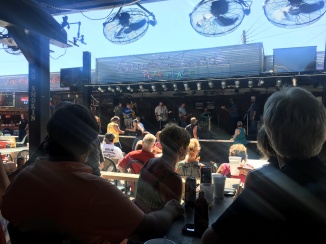 Knuckleheads – settling in for a musical treat

Equipped with glasses of Bourbon and chilled cans of Kansas-brewed beer, we perched on stools in the shady area, alongside a pair of toe-tapping cowboy boots and bright pink cropped top.  And onto the stage came Scotty Dennis and his incredible voice.

Wearing jeans and a short-sleaved panelled shirt with a baseball cap and dark glasses, Scotty was about 6 feet tall and a big strong man with lungs to match.  He oozed soul as he sang Eric Clapton’s “Five Long Years” and gave the Fabulous Thunderbirds’ “Wait on Time” an epic Blues makeover, making the hairs on my arms stand on end.  Through the loud beat thumping out of the speakers, John shouted in my ear that it would put hairs on my chest, but I think he was referring to the rather strong Bourbon he was sampling in small shot glasses, rather than our friend Dennis. As the big man wandered past our table after his set, we couldn’t help gushing at him how brilliant he was. Ever the professional, he handed me a card for his band Scotty and the Soultones, told me about his recording contract and when his next album was coming out, before ‘disappearing’ me into a huge bear hug.  I got a faceful of pecs and biceps and a drawled deep gravelly “Thank you Lorna” in my one uncompromised ear.  He could sing to me anytime. 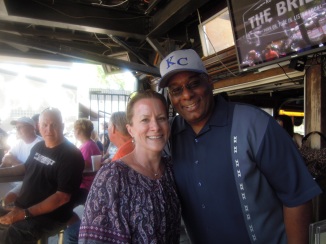 The big man with the big voice – Scotty Dennis

As the resident band carried on and Dennis worked his audience shaking hands and hugging people all around, country music followed soul and the scorching sun over Kansas City continued to burn the necks and shoulders in the seats in front of us.

As the afternoon jamming session was drawing to a close, a striking looking woman, with dramatically black cropped and shaved hair with a shock of orange on top, heavy eye make-up and covered in tattoos made her way towards the stage.  She was one of the few non-bikers at the venue and had been noticeable throughout the afternoon for sitting quietly at one of the picnic tables near the stage.  She had spent that time watching and filming her friend on her phone.  The friend was tall and lithe with long bleach blond hair extensions, ‘boyfriend’ torn jeans, and a cropped knotted T-shirt showing off a very tanned and taut midriff and was making the most of her fabulous figure.  About 30 years younger and at least fifty pounds lighter than most of the biker ladies boogeying on the dance gravel, and with legs up to her armpits, the friend threw her legs up into splits high kicks repeatedly, posed suggestively, laughed theatrically and threw her head forward and back swishing her extensions like a mane in the manner of a shampoo advert.  But when Megan Ruger took to the stage and picked up the microphone, her platinum friend became photographer, general groupie and proudest fan.  Megan kicked off her shoes and – in her ripped jeans, socks, Rock n Roll black T-Shirt and Ray Ban Aviator glasses – was, as Simon Cowell might say, “stripped back”. And she had a voice worth waiting for. She flipped from country to rock with ease.  She projected gutsy chesty notes across the train tracks, talked through some toe-tapping old country favourite lyrics and held the most delicate breathy high notes while holding the band and the audience under her spell throughout.  I might even have got up for a bit of a dance so she must have been doing something right. 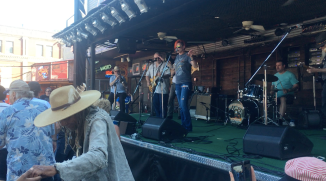 It turned out Megan and her friend were visiting for a couple of days from Vegas, where she is currently appearing in a tribute show (John and I found this out by shamelessly fawning over her like two groupies when she grabbed a beer at the bar).  Her friend was probably, judging by her dancing moves, in another show in Vegas.  Megan had spent some time in Nashville and, keen to pursue her love for rock rather than country, had gone to Vegas.  The old favourite country songs and her rock renditions of “Keep Your Hands to Yourself” “Sweet Home Chicago” had everyone on their feet.

Who knew that such a gem as Knuckleheads could be found on the wrong side of the tracks in Kansas City hidden in amongst the industrial hangars and deafening horns of passing freight trains.  What a revelation of a Sunday afternoon… my friends and I were welcomed into the bikers’ haven like old friends, served inexpensive cold beer and lip-smacking barbecue meat.  But most of all for a small optional donation into a bucket, we were entertained by a talented band of musicians who played for the best part of five hours and by two standout performers.  They sang live – no frills and nothing but musicians to support them – and had talent and voices that would put many of the popstrels, boybands and divas in the charts today to shame.

The X Factor and American Idol don’t know what they’re missing, and I hope Dennis and Megan get to perform in their own right to sell-out arenas.  But just for that Sunday in Kansas City, I felt selfishly thrilled to have our own intimate live gig, and the music world’s loss – at least temporarily – was our gain. 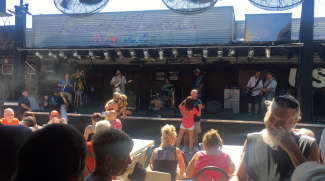