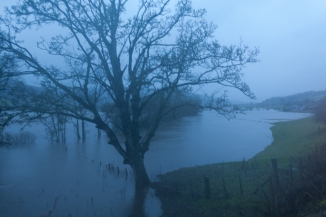 I’m sitting in a coffee shop in a small town called Pitlochry in the Highlands of Scotland.  Storm Frank is in full swing outside.  The sky is a dark shade of grey, the rain is horizontal and relentless. The entire valley – or glen – has been turned into a series of great lakes with small fishing sheds and treetops poking incongruously out of the middle of them.  Both the Tay and the Tummel have burst their banks and there is flooding of biblical proportions.  We’ve been lucky – our cottage further down the valley is just high enough up the hill to be above the waterline but the cat has her wellies ready and her eye on her favourite Christmas bauble just in case.

I cycled the 6 miles over the hills to this the nearest coffee shop, from a hamlet called Logierait.  My wheels covered more water than road and my trousers are now dripping onto the polished wooden floor.  I’ve just picked another lump of mud (I think – although it could be cow dung) off my cheek and have been edging my sodden boots towards the big open fireplace near the end of the table. 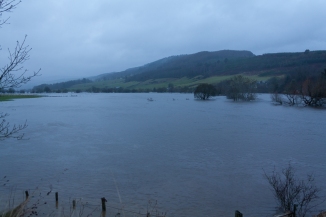 Believe it or not, this is when Scotland comes into its own.  On days like this when I have lost sensation in my toes, my ageing and injured hamstring is crying out for a hot bath and I am reminded as I glance at the sleeve of my fleece that half-way through one of the downhills I may have used it to blow my streaming nose.   When I am covered in mud from head to toe, am so wet that even my underwear needs wringing out and my cheeks are stinging from a combination of hail, rain, sleet and snow.  It is only then that I can truly appreciate the crackling log fire and the huge pot of tea served by the welcoming and chatty landlord who makes a passing comment about how ‘driech’ it is outside and doesn’t blink an eye when I position my wet feet so close to the fire grate steam rises off them. 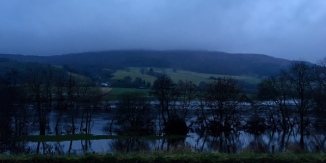 It is tempting then to sit back into the weathered leather armchair, read my book and nod off against one of the soft tartan cushions but the waters are rising and what is left of the afternoon light is fading fast.  I have squeezed the last drop out of my pot of tea, that was definitely a drying splatter of cow pat not mud, and I still have the cycle-wade-swim home to tackle.  I don my snotty fleece and damp waterproof, reluctantly remove my soggy boots from the fire place and head back out into Frank’s path.  I will be back at the cottage soon, and it is only 6 miles away.  But thanks to the Scottish hills and weather, my cycle will have been an adventure and the open fires, mugs of tea, wee dram of whisky and cosy evenings a delicious reward for venturing out. 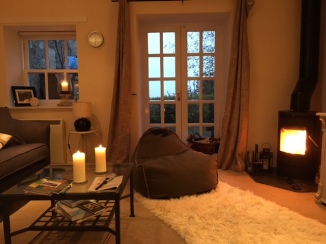 It won’t come as any surprise that we Britons are particularly keen on tea or that we are keenly particular about how we drink our tea. After all, we have a history of shipping tonnes of the stuff thousands of miles across the seas of the world to preciously brew the perfect cup.

This morning I paid a visit to one of my favourite tea shops, Hettie’s in Pitlochry. I was served a steaming silver pot (the handle of which somehow didn’t scald my hand when I tried to pour it so that gets serious brownie points), with an incorporated strainer filled to the brim with large leaves and petals of the Earl Grey variety. Cup and saucer with matching jug of milk – large enough so that I wasn’t left rationing it to stretch to a third cup. And a small egg timer on a dish accompanied by instructions from the waitress that I should wait to remove the tea strainer from the pot until all the sand had poured through the timer. Not a gimmick I assure you. My patience was rewarded with a perfectly brewed pot of deliciously refreshing tea, and on my third cup I was not left feeling like I was sucking on a teabag that no amount of milk would dilute. The huge homemade cakes on the counter and offer of an afternoon tea would have been the perfect accompaniment and were tempting. But as it was still very much morning and I’d only just polished off a plate of Scottish smoked salmon and scrambled egg for brunch; I felt the three-storey chocolate fudge cake might have to wait until I’d conquered one of the nearby Munros and earned the calories. So today I enjoyed it vicariously, sipping my tea and watching as people on nearby tables loosened their belts in anticipation of a plateful of gloriously sinful gluttony.

Of course, perfect though it was, I would not presume to assert that this offering of tea is suited to everyone or to every occasion. After all, our country’s traditional brew has oft been the subject of long and unresolved arguments.

There are arguments to be had about whether it should be served in a cup or a mug. I would humbly suggest there is a time and a place for both. A solid and bucket-sized mug is appropriate when sitting down to do some work. After all, getting up and down to go and refill your cup would hamper productivity (considerably in my case, given how quickly I gulp the stuff down).

There are arguments to be had about whether powdered or cubes of sugar are appropriate. Short shrift on that: the only time a sugary cup of tea is in any way acceptable to me is when I am soaked and chilled to the bone, I have been trekking up and down hills for hours, my hands are shaking and blue with cold and the ‘isolated rain showers’ forecast that morning have had me pondering an invention involving windscreen wipers on waterproof jackets for the last five miles. The only issue I have then with a cup of hot and sweet tea, is how long to use the warmth through the polystyrene cup to warm my hands, before gulping it down and allowing the sugar and heat to resurrect my tired limbs sufficiently to make it across the finish line.

There is also an argument about whether milk should be poured into the cup before or after the tea. In this day and age, unless you are attending a Buckingham Palace Garden Party, this particular argument is pretty much redundant. It is not, as some will persist in arguing, that popping a splash of milk in first has some fundamental impact on the flavour. It doesn’t. The practice dates from when the heat of the tea without the cooling effect of the milk would have made the very fine china crack. So unless you have the antique china out, this one’s academic.

These are relatively minor arguments when you consider that a request for milk at all in any self-respecting café on the European continent will be met with a disgusted raise of the eyebrow and a muttered ‘ah, les Anglais!’; a slice of lemon being the only acceptable addition to a – gasp – glass of (very weak) tea. On this rare occasion, I will have to brazenly dismiss the culinary views of our Francophone neighbours. After all if you pay attention when travelling on the continent, their so-called tea is created with a brand of teabags (bags?!?!) which are rather difficult to find in the British Isles – a sure sign they are fit only for export and not for the discernible British (tea) pallet.

I have now reached the bottom of a bucket-sized mug of ‘builders’ tea – this one carefully selected for a stint sitting in front of the laptop at home(see argument above). The sun is heading over the hills on the other side of the valley and the storage heaters are creaking into action in the cottage. That must mean it’s time to sample a glass of chilled white wine and sit back to watch the black clouds and patches of pink sky battle over the snow-covered summit of Schehallion.

And that brings me back to our French friends. Where I dismissed out of hand their raised eyebrow over our milk-with-tea habit as uneducated, the aperitif choice of beverage is undoubtedly their domain. So the question is…bistro wine glass or coarse tumbler? Serve with olives or charcuterie? To hold the stem or the body of the glass?